中文 Official Website
Press Release Latest Results Competition Schedule Photo Gallery Medallist Delegation List About the Games Official Games Information
About the Games – Tokyo 2020 Olympic Games
The International Olympic Committee (IOC) elected Tokyo as the host city at the 125th IOC Session held in Buenos Aires, Argentina on 7, September 2013. This is Tokyo's second time to host the Summer Olympic Games, the first being in 1964. It is also the fourth time Japan has hosted the Olympic Games. Tokyo is the only Asian city and the fifth city in the world to host two Summer Olympic Games.

The emblem of the Tokyo 2020 Olympic Games consists of chequered patterns. Chequered patterns have been popular in countries around the world throughout history. In Japan, the chequered pattern was known as “ichimatsu moyo” in the Edo period (1603-1867), and this chequered design in the traditional Japanese colour of indigo blue expresses a refined elegance and sophistication that exemplifies Japan.

Composed of three varieties of rectangular shapes, the design represents different countries, cultures and ways of thinking. It incorporates the message of “Unity in Diversity.” It also expresses the fact that the Olympic and Paralympic Games seek to promote diversity as a platform to connect the world. 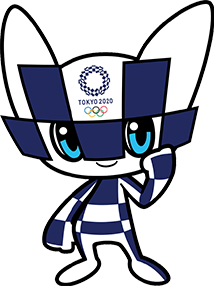 The Tokyo 2020 Olympic Games mascot is styled with the Ai (indigo blue) Ichimatsu pattern from the Tokyo 2020 Games emblem, a tribute to both the respected tradition and modern innovation of Japanese culture. MIRAITOWA has a personality inspired by the Japanese proverb, “learn from the past and develop new ideas”. MIRAITOWA is cheerful and remarkably athletic, with a very strong sense of integrity. It has a special power to instantly teleport anywhere it wants.

The name MIRAITOWA is based on the Japanese words "mirai", meaning “future”, and "towa", meaning “eternity”, representing the wish that the Tokyo 2020 Olympic Games will lead to a future of everlasting hope in the hearts of everyone around the world.
（顯示更多…）
‹ › ×